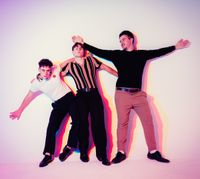 Daniel Wakeford is a singer-songwriter from Brighton, UK.

Daniel, who describes himself as a singer-songwriter with autism, is an inspirational performer and is forging a new path through the music scene in the UK and portrays a much-needed positive image of learning-disabled people in the media. Bringing his music and personality to an audience eager to hear his songs through two self-released albums and at live performances, Daniel’s story really is unique.

Plus support from Wild Horse

Wild Horse are an indie trio whose funked up guitar pop flows with the exuberant energy of kids who grew up listening to hip hop beats and classic 60s/70s Brit Rock vinyls. Wild Horse sound like what putting on a new suit and lighting a cigarette to go on a night out feels like.

Formed by brothers Jack and Henry Baldwin and best mate from primary school Ed Barnes in Sussex, Southern England, they have been relentlessly gigging since their teens. Still only just into their 20s, the guys have recorded many great tracks earning enthusiastic support in BBC Intros, BBC local shows, RadioX, Caroline, Amazing and many other local FM & internet stations around the world.

THIS EVENT WILL TAKE PLACE IN THE KOMEDIA STUDIO BAR